Home/Events, Get a bike, News/Big Bike Revival Success In Bradford
Previous Next 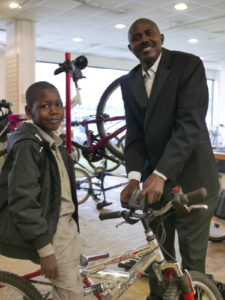 Bradford’s Community Bike Centre ‘Capital of Cycling’ really is a bike paradise. This summer as part of Cycling UK’s Big Bike Revival they’ve been fixing up and giving away dozens of bikes to asylum seekers in Bradford.

Having been part funded by Cycling UK, Bradford’s Capital of Cycling has fixed up and revived over a hundred bikes to give away to asylum seekers and refugees in need of transport. Using bikes supplied by the Margaret Carey Foundation, who give inmates bikes to fix in prison workshops, they worked alongside Bradford Bikery to deliver the programme. In addition to giving inmates a useful skill this process has at the same time enabled people to benefit hugely from cycling.

Adel from Sudan is one such person who has benefited from the programme. He came along to get his bike fixed and was given a town bike as a replacement whilst it was getting mended. On his return, he smiled to give thanks to everyone who had fixed up his wheels as he was unable to speak English and is currently learning at a college in Bradford. Now he’s back cycling his favourite bike.

Some of the people we have given bikes to, are in absolute transport poverty. A bike can be a crucial tool for getting around. Asylum seekers in the UK have fewer rights than someone in prison. Application for asylum can take years and whole families can be stuck in limbo during this period, not allowed to seek work, penalised with sanctions and not receiving even basic tenants’ rights, not knowing if they’re going to be sent back into a warzone, to torture or worse.”

Dave Robison, The Capital of Cycling

“The bike enables people to get from place to place far quicker, it gives them a tool to survive on – 12 miles of travel, e.g. to the shops and back, to school and back to collect kids and so on can now be done in a fraction of the time,” enthuses Dave, “What we are doing here, with simple tools, are real life-changing interventions.”

According to Dave, the asylum seekers who come to get a revived bike or an old one mended, really do use them:

“I get a great feeling when I walk around Bradford and can see people cycling around on the bikes that we fix up or have given to them.

“As well as using the bikes regularly, some families come and volunteer at our maintenance sessions on Friday. There are people here with useful skills, that would be completely wasted. There was a couple from Iran who fled persecution after one partner changed faiths and became a Christian. At home in Iran, the fellow was a stock car racer and a car mechanic, so he’s picked up the bike mechanic skills we taught him really quickly and is now helping us to renovate scrapped bikes and give them back to the children in the community.”

Dave continued, “The legacy of The Big Bike Revival has shown that we’ve got dozens more people onto their bikes, given them the freedom of cycling and we hope in the near future to work with a refugee charity to create regular led rides for the community.”

Visit Cycling UK’s Big Bike Revival site to find out more about the programme and read more case studies on our website.