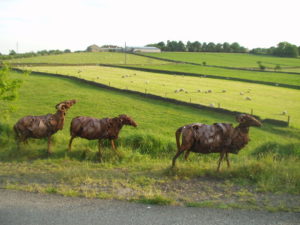 This fantastic cycling and walking route runs along a disused railway line from Oakenshaw near Bradford all the way to Dewsbury. The path is well surfaced and entirely traffic free. As such it is ideal for families with young children or anyone looking for a nice easy ride or walk.

You can follow the National Cycle Network from Bradford to Oakenshaw where the off-road trail begins.  Our page describing the City Centre to Bowling Park route will help you do that, using quiet or traffic free paths.

If you’re on foot then you can link up with either the Kirklees Way or the Spen Way Heritage Trail at Oakenshaw.

This greenway ride boasts great views and trailside sculptures and statues, all without the inconvenience of traffic. We start at Victoria Park on Cleckheaton Road, Bradford, before the greenway follows the path of the former Lancashire and Yorkshire Railway.

Keen-eyed individuals will spot the LYR boundary stones and other remnants of the old line. This is part of Sustrans’ National Cycle Network Route 66. The current track is freshly laid and offers a great steady route with not too many uphill challenges.

The trail is also lined with a number of sculptures such as Sally Matthew’s flock of Swaledale Sheep, constructed from recycled industrial scrap. Follow along the track and you’ll head through Cleckheaton and Iversedge. Eventually you’ll wind up in Dewsbury near the River Calder and not far from Dewsbury Train station (if you can’t be bothered to cycle back!).

The greenway was opened in 2000 and joins the outlying towns of Cleckheaton, Dewsbury and Heckmondwicke with Bradford itself. The greenway passes through a range of environments, from densely populated urban areas to moorland views and is blessed with more than its fair share of art installations, including the ‘Giant Pedal’ and ‘Swaledale Flock’ sculptures, to name but two.

Sustrans offers a GPX map and more details (but from Dewsbury TO Bradford rather than the other way around).