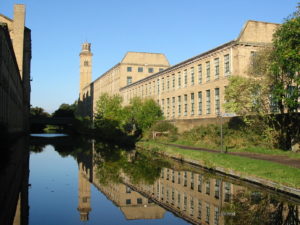 If you want off-road, flat routes, you can’t get much better than a canal towpath.  The Leeds Liverpool Canal towpath has some of the most pleasant and varied scenery you could hope to expect on a transport route that connects cities.

Route: From Saltaire to Leeds (on the Leeds-Liverpool Canal)

This route begins in the UNESCO World Heritage Site of Saltaire (but you can also start in nearer Bingley, or from Shipley as this is mainly a route that follows the Leeds-Liverpool Canal towpath all the way and you can join it at numerous points along its route).

Saltaire is a Victorian model village that boasts a major art gallery, independent cafes and shops in beautiful listed buildings. Over the river is the delightful Roberts Park, with a playground, picnic area and café, and a Victorian tramway to the local beauty spot of Shipley Glen.

Cycle towards Shipley then to Apperley Bridge through ancient woodland, a wide valley, and past cattle grazing the banks of the River Aire.

Continue to the picturesque havens of Rodley Nature Reserve and Bramley Falls. The Reserve has a variety of habitats sheltering dragonflies in summer and tourists in its friendly café throughout the year.

This popular and attractive ride winds its way along the traffic-free towpath of the Leeds and Liverpool Canal. The route is full of historic interest and some surprisingly scenic countryside.

As you near Leeds you’ll pass through Kirkstall, hopefully spotting the Kirkstall Abbey on your left.  Arriving in Leeds, you’ll exit at Office lock, near “Granary Wharf Car Park”.  If you wish to get to Leeds train station, go right the way under the railway tunnel and you’ll find the station at the next major junction on your left.

View a Map of this route on the Sustrans website*:
http://www.sustrans.org.uk/ncn/map/route/leeds-to-saltaire
*Note: the Sustrans page’s version of the route is from Leeds to Saltaire (reversed):